The oldest surviving municipal building in Stevens Point, the Stevens Point Fire Department was a volunteer outfit when the station was built. It initially housed a horse-drawn steam engine dubbed the “General Ellis”.

From the site (visit link)

Built in 1885, this building was added on to c. 1895-6, just a years after Stevens Point became a full time fire department. Used until 1967, when the new headquarters building was built on Franklin St. Historic Fire House No 2 became the first YMCA building. When the Y moved out c.1974 the building was used for storage until 2006 when the Portage County Historical Society purchased it from the City of Stevens Point.

This building currently houses the 1933 American LaFrance truck purchased by the City at the Chicago World’s Fair, the c. 1890 hose wagon, and various other firefighting artifacts. It also houses the first printing press in Wisconsin, which was brought to Stevens Point, via Oshkosh, from Green Bay, where it printed the first newspaper in Wisconsin. 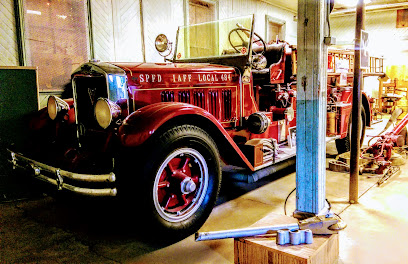